An all-new play has just hit Broadway. Ladies and gentlemen, prepare to welcome Daniel Radcliffe, Cherry Jones, and Bobby Cannavale and the Lifespan Of A Fact. In this true (or is it?) story, fact checked Jim Final is assigned to review the essay submitted by John D’Agata to Harper’s magazine surrounding the death of a teenager. But as Fingal’s research continues, he finds that he “has a huge problem: John made up some of his article. Well, a lot of his article. OK, actually, maybe the majority of it? What starts professional quickly becomes profane” as Final goes on to effectively make D’Agata’s life living hell, with Cherry Jones, playing the editor, swooping in to mediate before the heated debate comes to blows. Tickets for this star-studded show are on sale now and expected to disappear FAST – so don’t delay! Choose your show from the following list and book well in ahead for the best chances of a place!

The Lifespan Of A Fact Tickets:

In 2003, Dr. John D’Agata submitted his essay “What Happens There,” focused on the serious subject matter of the death of the teenager Levi Presley in Los Angeles to Harper’s Magazine. The publication had recent Harvard graduate Jim Fingal fact-check the essay – resulting in it being pulled from publication due to factual innaccuracies and inconcistencies. The result was a huge seven-year debate in which the exact requirements of how true-to-life a retelling of a story is required to be were under scrutiny, culminating in the book “The Lifespan of a Fact”. Co-written by Dr. John Agata and Jim Fingal, the book details their experiences around the controversy, and includes the whole “What Happens There,” essay complete with Final and Dr. John’s debate and correspondence.

“The Lifespan Of A Fact,” play is based on the book, and seeks to further explore the concept of truth, lies and morality in a witty and thought-provoking comedy. Daniel Radcliffe, playing Fingal, is of course best known for his role in the Harry Potter film franchise, but this is not his first foray into Broadway by any means: he caused a stir by stripping off onstage in Equus in 2008, ventured into musical comedy in How to Succeed in Business Without Really Trying in 2011, and in 2014, took the lead role in The Cripple of Inishmaan by Martin McDonagh. His fellow stars, Cherry Jones and Bobby Cannavale, are Broadway veterans, with Jones having won Tony Awards for her roles as lead actress in The Heiress in 1995 and Doubt in 2005, her most recent performance being 2014’s The Glass Menagerie. As for Cavandale, he played leading roles in Mauritius, David Mamet’s Glengarry Glen Ross opposite Al Pacino and The Big Knife, and was nominated for a Tony Award for Best Actor for 2011’s The Motherfucker With the Hat.

Directed by the Tony nominee Leigh Silverman, “The Lifespan Of A Fact,” seeks to re-open the discussion of artistic license in order to get across an important message, versus the ethics of altering the truth; as well as raise some questions about the very nature of truth and reality itself.

“One of the best things about seeing a play for me, when I was a kid, was the drive home when me and my mom and dad would, like, dissect it and discuss it and see what we thought,” Daniel Radcliffe said, discussing the reasons he was drawn towards the role of the character Fingal and his aims for the play’s outcome. “And I really–like, that’s my hope for this play, that some really good, cool conversations come out of it.”

The Lifespan Of A Fact will have you looking for answers to questions you never knew existed, and is likely to be all you’ll want to talk about in the aftermath. It’s the kind of play you’re not going to be able to get out of your head for days after seeing it. One thing’s for sure – it’s unmissable! If there’s only one play you see this year, make it this one – The Lifespan Of A Fact is showing NOW at Studio 54. Tickets are in high demand, so get ‘em while you can! 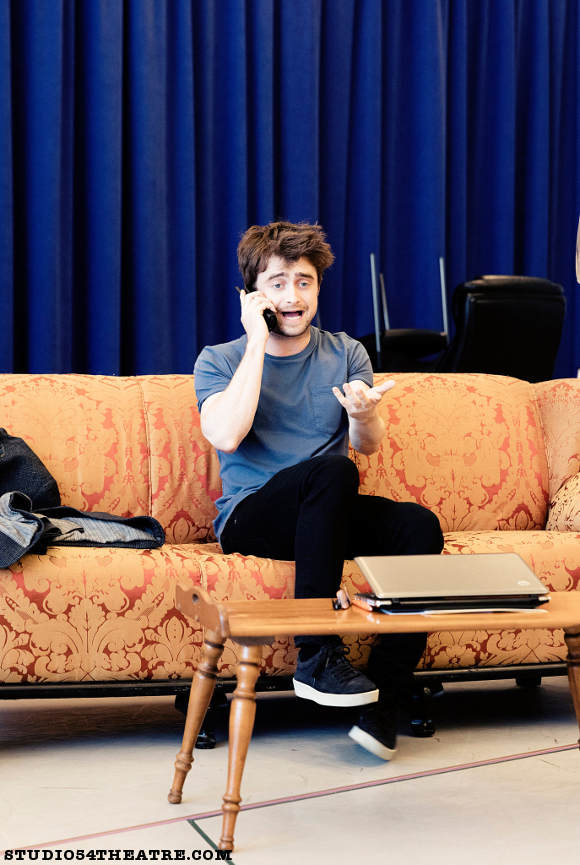